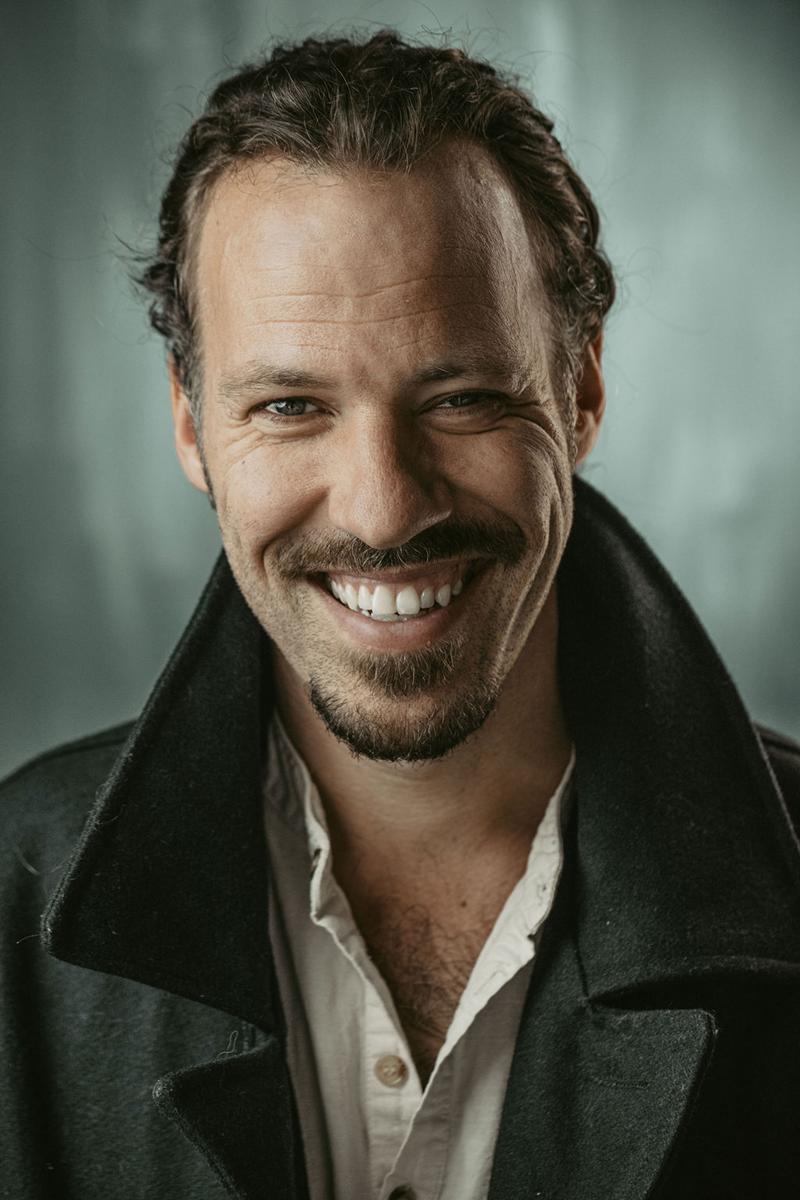 You worked as a backup dancer for stars such as Britney Spears. Were you always planning to transition into acting, or was it a sudden decision?

No, I was always planning on transitioning. I had been an actor first, or the love for acting had come first, and the dancing was a detour to sort of find my way into the entertainment industry, and then branch back out to the thing that I really, really love, which is storytelling.

Do you feel any skills translated well from being a dancer to becoming an actor? For example, timing and memorizing actions?

Absolutely, yeah. I think there is a rhythm to creating a scene, to acting, to action sequences, to fight sequences, that I think the training in dance has really helped with and been very beneficial.

What has been your favorite TV or movie role to play?

The movie that is out right now, Swap Me, Baby, is a comedy, a body-swap comedy that I got to play with my life partner, Kim, who was pregnant at the time. And I enjoyed it so much, because it was a comedy. I got to play a French mushroom-tripping gigolo. That's just so out of the wheelhouse of what I was used to. I got to have long curly locks and a mustache and it was really fun to do that. And it was very collaborative and to work with my life partner was just a joy. It was probably one of my favorite experiences.

If you could play any role from past TV show and movies, what role would you have liked to play?

One of my favorite films is Braveheart, and then another film called Leon: The Professional. Those would have been dream roles or something along the lines of that would be amazing. And to be really honest, anything where you get to work closely with horses and where they would allow you to actually ride these horses and do all that stuff, that would be really, really fun.

You have a production company. How do you make your production stand out and do you have any aspirations for your film company?

Yeah, those are big questions and there are a lot of answers to that. I'll try to be concise. I formed Patronage Films, and I formed it to create a environment for storytellers that is driven by the inspiration of a story and the inspiration of an artist that felt called to share that with the public, versus the motivation of the financial gain, right?

I think right now, a lot of the content that is made has to go through financial liability, which says if we can do something that is already recognized, that has any franchise capabilities or that is a superhero comic, those take precedence and those are easier to get financed. And I think with that, fall of the wayside, original stories, inspired stories that don't have a star attached, that have new filmmakers come in and tell their story and also share perspectives from all sides, right? Right now, there's a lot of mandates, a lot of political push and force on artists that I find very dangerous in how it our shapes our culture. It's such a strong media, film and TV, that I think we got to be careful to not control that too much, especially not with the motivating factor of financial gain.

Why did you decide to produce the film, Swap Me, Baby, and were there any challenges when filming?

So many challenges, to answer that question first. We shot right in the midst of when Covid was at its worst and the restrictions were at its worst, so that was a challenge. We had a wildfire going in Oregon, where it was shot, that almost ruined our shoot, and we had to really get creative to continue to shoot this comedy in an environment that was covered in smoke and looked very dark, more like a horror film. And I made the movie because we got a patron, somebody who gave us money with no caveats, just tell an inspired story, treat the artists fairly, and we got a certain amount of money to do that with. And so we set out to find a story that we could do for very little money and still pay as fairly as possible on that budget. And we wanted something original.

It's a concept that is very well known, a body swap concept, but we wanted to tell the more adult version of it, of a couple that is expecting and that is on very different sides of how they perceive life, a French mushroom-tripping gigolo and a very more uptight, trying to control life business woman who will swap bodies in the film to figure out how to get along and become parents. And there was just a story that managed to be entertaining and funny and easy enough to tell with two actors, mainly. It's just Kimberly and I and two supporting actors, so you have four total actors with a few locations. And I wanted to show what is possible with very little money to do and still be entertaining.

Is getting funding a challenge when producing your own productions? How do you handle and sure projects are adequately funded?

It's a huge challenge. I just took the approach of being really honest and authentic with my approach, with my pitch to financially abundant people and to say, look, I want people involved that have the finances to support the arts. I want film lovers that would buy if they love paintings, they had the money to just buy a painting, because it inspires them, because they think it should be in a museum or shown to the world purely for the purpose of sharing that, not with the ulterior motive of how much money can I make on this. And I was lucky, I found Charlie. Charlie Thiel is our first patron that agreed to this concept. And it's challenging to talk to, especially people in the finance world and say, look, it's not about profit when it comes to storytelling. It's about furthering culture. It is about starting conversations in culture. It's about inspiring. It's about catharsis. Yeah, it's just about really tending to the health of a culture, versus making as much money as you can.

Now tell me if you want the following question on or off the record. Do you feel that profit maximization in Hollywood hinders creativity?

Yeah, it doesn't have to be off the record. I'm very outspoken about this and I try to not put any blame on anybody, it's just a system we live in. Hollywood has just become a way, a very specific way of ensuring that we can still tell stories and yeah, the algorithms and the idea that a certain star is needed to secure a certain budget, or a franchise or a superhero comic as a source material is required to make it profitable enough to continue the system, it sets up an environment where the most important question of, hey, artist, what do you want to tell? What means something to you? What matters to you? It's not the first question that's asked.

The first question that's asked is not, who did you write this for or who do you see in this role? You can pick anyone. It's like, no, it's got to be for this actor. We got to have this and that. So it just kind of limits how creative and how original you can be if you have too many limitations and too many, not even limitations, but almost like a mandate. Here is what we're mandating that you have to touch upon. Here is the mandate on how you got to cast it. Here is the mandate on what political or social group of players can be involved. We've just gotten so divided, and I think Hollywood is in its own bubble and is kind of biased now. It's not an open space anymore.

I do, actually. It's really fun. It frees up the actor in me, because I've got other things to do as well, so I don't get too hung up on the ego and am I good, am I not? It's like, let's get this done. Gives me the freedom to say, hey, I think this character needs more of this, or we should delve deeper into this. Where on a Hollywood production, you got to check in with the powers to be whether that fits their ideas, in this case, I'm the producer, so I have an influence on that. And I love being on set acting and, at the same time, getting to ensure that everybody's feeling taken care of and feeling heard and feeling treated fairly. So yeah, I really, really enjoy it.

Some people may know you from the Arrowverse. What has been the best part of being involved in that series?

The people that I met, the lessons that I've got, as far as my position in Hollywood. What I mean by that is it was the pinnacle of what you were told as an actor of what success should be. I got to put on a superhero costume. I was part of a really successful show, and I played a role that was supposed to make you famous and get you into a position where you can finally pick your projects and have a certain freedom, which it did not provide in that sense. And so I got to really just sort ask myself, why am I acting? Why am I a part of this system? What do I really want? What matters to me? And so those were some big lessons I got out of working on that. And years after, that came from all that.

What has been the proudest moment of your career?

Probably doing Swap Me, Baby. It's just so beautiful to work with family, to be pregnant together, and have fun while we're eight and a half months pregnant and see my beautiful partner just glowing and being so funny and wonderful to work with, and to have this community of artists in a time where everybody was very scared. Hollywood was shutting things down. It was just really difficult to be creative and playful, and we managed to do that with a fair amount of ease and we had a great team. And I'm very proud that we decided to pay people hourly, the same rate, and just say, look, everybody gets paid based upon their time put in. We're not going to play the game of you are worth more because you're more famous. You are worth less because you're new. It was just sort of like, thank you for joining our team, and we have this amount of money, and we're going to make sure that it's an equal and fair distribution, versus the way it's usually done.

Well, first I'm going to say Swap Me, Baby, this film that I'm continuously talking about, is on Amazon and iTunes for purchase and rental right now. It will be on Tubi and the other streaming platforms this month. And personally, you can follow me on Instagram at Falk Hentschel, just my name. DM there or comment there. I'm very active on that. And if you are interested in filmmaking, you are an investor that likes this idea, you are a filmmaker that likes this idea, write me at patronagefilms at gmail dot com. Yeah, that's where you can find me.