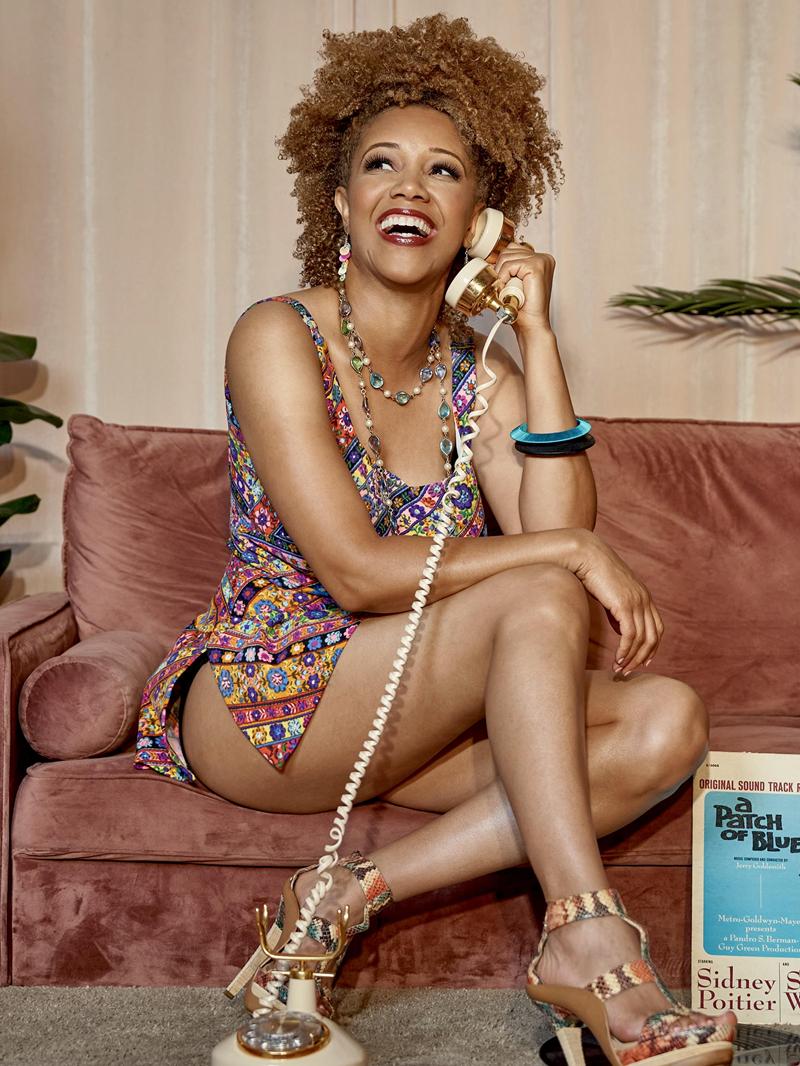 You were on the TV show, Passions, for a few years. What did you like about working on that show?

Passions for me was such a blessing because it was my first series regular, and they had so many different types of characters that were on the show that I just had a blast. I went to work every day with a smile on my face and people were just like, you're too happy. I need you to not be so happy. But I was happy all the time because I was working.

Soaps do about 240 episodes a year. Would you say acting in such a show is helpful for actors?

I do believe that having that type of discipline really is helpful because you're constantly working every single day. So you're using that muscle. I have found when there's so much downtime, now that I've left the soap opera world, when I have downtime too much, sometimes it's hard to memorize the lines as often. So, I do believe being on a soap and you're working every single day is very helpful. But the downside about being on a soap and working every day like that is you have to be so quick on your toes and make a decision really fast when you're an actor on a soap. And that is good for the soap world, but if you're doing comedy, it doesn't work that well because what would happen is a lot of people back in the day, they wouldn't hire soap opera actors if soap opera actors had been on soaps forever. They wouldn't hire them on comedy because the first day that we would rehearse for comedy on a Monday, things would be funny, but soap opera actors, by the time they got ready to tape, it would be stale. And so they weren't really good at being able to think on their toes and do things differently. So that is one of the downsides that I think people used to have. I don't know if that really pertains now, but I remember somebody telling me that years ago.

You also played JD's girlfriend on the show Scrubs. Do the cast members joke around a bit more on a sitcom as opposed to a drama?

No, it's the same. It's the same all the time. Everybody's always having a good time. Not every show is like that. Even on some of the sitcoms that I worked on, people were miserable, but for the most part, when I worked on Scrubs and on Passions, I think we always had a good time and always smiled and had fun. And I think Passions was a little bit different because it had a comedy twist to it. So I think that's the reason why there was a lot of laughter in between things.

I see you've also filmed at docuseries, Queens of Drama. Did you enjoy that experience?

Well I enjoyed being back with Lindsay Hartley again, who was on Passions with me, and getting the opportunity to meet Donna Mills and spend time with her. She has truly been a blessing in my life, even outside of the show, even though the show didn't last but one season, it's been a true blessing. So I enjoyed it in the degree that it was fun to work with these incredible talented women. But I wish that we could've really showed what our potential was if the show would've continued on.

Do you feel that Hollywood has gotten more inclusive since the start of your career?

I think it's always been inclusive just because the people who are at the higher level agencies, they tend to get things a little bit easier because they're with a higher agency. So if you're with Tom Cruise's agency, you're probably going to get a job a lot quicker than somebody who's at a smaller agency. So I think it is inclusive in that sense, but I feel like after the pandemic and Black Lives Matter and all of these different diverse movies that have been doing really well, I think things are starting to change a little bit, which is amazing. It's a good time for things to start changing. And I'm starting to see more diversity with all kinds of things. The film that I just did, Amy Victoria were two deaf women and it happened to come out at the same time as Coda. So I'm finding that there's more films and TV shows that are being inclusive as far as including everyone, not just of a race, but of all different backgrounds.

Well, I knew what I wanted to do when I was four years old. So my mother made sure that I was at a school that had acting in their program. Not that it was a professional school, but they still had acting. And then I went to college, I auditioned for musical theater and acting and got into a couple of schools. I chose Emerson College. And then I moved to Los Angeles and booked seven shows in six months, which is kind of unheard of. And then I booked Passions. So I have a really great story, as I'm sure some people don't have quite the same stories I have. I was very blessed to be able to jump in and book things right away.

Do you have a favorite show that you've acted on?

Oh man. There's so many. When I first started, Sister Sister was probably my favorite show that I did. Ooh, wait. Or was it Keenan and Kel? It's probably a twist between those two shows. And then of course, when I booked Passions was a whole nother ball game. And then Scrubs was another amazing opportunity because it was different. And I got to have my comedic side show up again. And then the newest show is Monogamy, Craig Ross, Jr's Monogamy. And that character is so different that it's probably my most challenging character that I've ever played. So right now it's probably my favorite.

If you could play any role, who would you play?

If I could play any role, I would take and combine Sandra Bullock and Halle Berry together. And they would create this child right here. So all of their characters and movies and Speed and all those, that's what I do. I feel like is my best is romantic comedy, is probably my favorite type of role that I would love to play.

Do you have any projects that you want to plug?

The short film that I directed. It's won two awards. It's won Best Directing and Best COVID Film. It's a labor of love because again, it was two women that were deaf and we filmed that over Zoom because we couldn't be in person because it was COVID at the time. And it turned out really well. And here I thought I was doing something and that I was blessing other people, but I was blessed having the opportunity to work with these women and to realize that I get... Sometimes I get so caught up in, oh, I'm fighting for roles for Black people and blah, blah, blah, blah, blah. I forget that there's a whole other world out there that is not being seen like the deaf world. And so I've been traveling and meeting all these different people at film festivals that like the disability, I think it's called Reel Abilities.

But I had the opportunity to meet all of these people who were in wheelchairs and who were autistic, who were amazing actors and creators and directors and writers. And hearing their stories has made me a little more aware of people out there that I probably wouldn't have put on my list, but now I want to put them on my list to be a part of my projects. And so that it really is inclusive that we do get to include everybody who's out there. So I'm honored today to be interviewed by you. (Editor's note: The interviewer uses a wheelchair) I think my whole goal in life is to make people feel included and to make people feel loved and appreciated. And if I get to the opportunity to do that my whole life, the acting world is secondary. It's not as important as making sure people feel special.