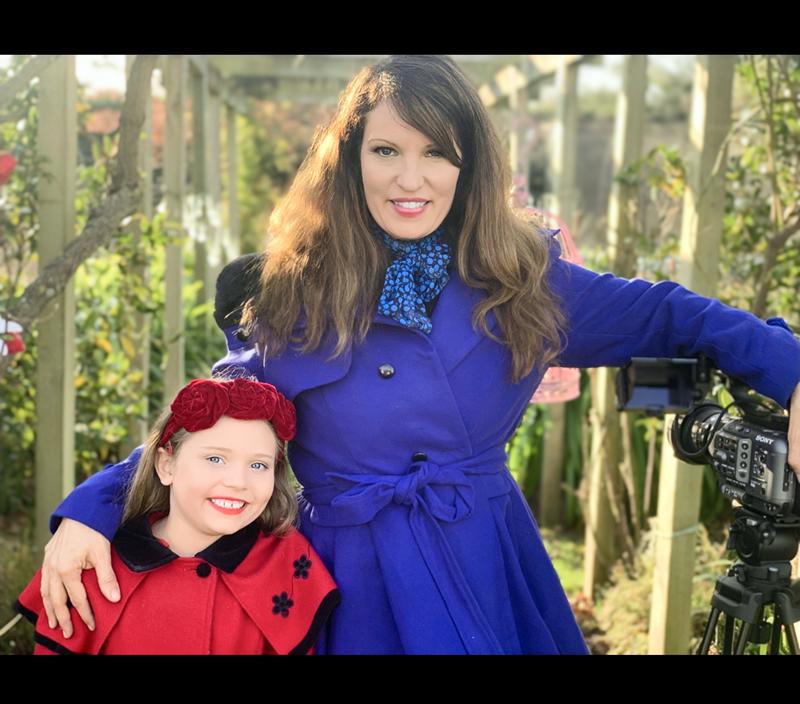 We have an interview with Camille Solari, she's the creator and cast member of "Charlie" on ROKU TV and Amazon Prime.

What made you want to do a sitcom from a baby's/kid's perspective?

When I was pregnant with Charlie (my first) I watched a lot of children's television to see what Charlie will be eventually watching and I felt there was room for a show that was live-action more in the POV (point of view) of a baby/toddler, but also funny, and had some grown up humour mixed in, to make it fun in a co-viewership way - meaning both the child and the parent can enjoy watching the television. Also, I really wanted to be around my baby/child, but yet I wanted to continue to work as a comedian + writer + director - and making a show where I got to be around my daughter all day was perfect and our dog Rocky who also is on the show. Then of course I had another baby Blade, and she joined the cast as well. Blade is 5 and Charlie is 7.

Most sitcoms don't make it past 3 seasons, you've at least double that. Are you proud?

It's been tricky. I mean I am the showrunner, so I am writing the episodes, directing them and it's a lot. Especially working with young children and animals, and it's hard to believe we have been doing the show for 7 years. Also, this show is low budget for television and so you have to get creative on many aspects of the filmmaking process! We use a lot of young filmmakers on the production, and they seem to enjoy getting hands on experience with TV production.

I am proud of getting to do a television show in New Zealand when Covid had shut-down most of the world. I created the show, hosted it, and directed it, and got to travel across New Zealand getting meet and interview, and be very silly with a number of "Celebrity" Kiwis. The show aired on TV Three and it was a lot of fun.

As far as my series Charlie, I've always wanted to have a TV series and about 8 years ago I decided once I had Charlie (my first daughter) I would have to devote all my energy into doing just that. It's an ideal creatively for me to get to play a comedian mother + direct and write. The producing side of making TV and Films has always come quite easy for me, I've written and sold and produced a handful of features as well as television networks in USA, Canada and most recently New Zealand.

What were the challenges of establishing a sitcom?

It's nearly impossible to get a show off the ground. Especially to do it in an independant style as I have.

Did covid affect filming? How?

How has staring in a sitcom affected your stand up comedy career?

I got into stand-up with the hope that I could land a TV series. Stand up sharpened my comedy chops and helped me be a better writer and performer.

What was your favourite Charlie moment of Charlie so far?

Getting to travel all over the world, especially in the early episodes. We went to Jordan, Duba, and we shot a really fun episode in Mainland China.

How does Charlie feel about being the star of a TV show? Can they see Lately she has been binge watching herself on Amazon Prime video. I think that's good? I think she's her biggest fan. Ha ha.

What are some of the challenges of working with animals?

My dog Rocky is the best. He is calm on set and mostly willing, and in real life won't listen to anything I say.

Where do you get your ideas for story lines and characters?

When we have to deliver an episode, I literally am writing days before we film, it's crazy, I wish I had more time. It usually stems from real life events with Charlie and her sister Blade who is also becoming a big part of the show.

How do you juggle raising a child, doing a sitcom and a stand up comedy career?

It's getting harder. I feel like my kids go to school and it feels like 1 hour and then I have to pick them up. The most important skill is dropping everything I'm working to to make sure they have my undivided attention. That's hard, but I want to be there for them. and I think I am. I guess the upside of being a mother in television who LOVES creating the best costumes and production designer - is I throw the most killer parties for my kids.